What Are Agency Workers Regulations (AWRs) and How Do They Affect You? 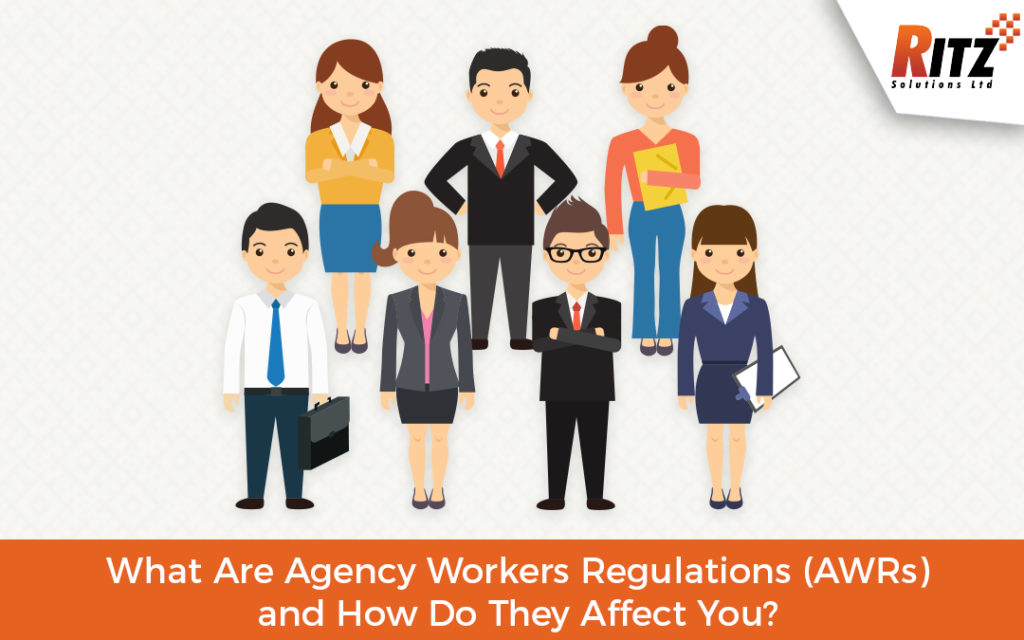 What You Need to Know

The 1st of October, 2011 marked the implementation of the Agency Worker Regulations. The legislation provides much-needed regulations for temporary workers so they could get a shot at the same pay as their permanent counterparts in terms of holiday allowances and working hours.

To qualify for this equality-based consideration, an agency worker must work complete 12 weeks for a job. Fortunately, if a worker completes this duration even by working part-time—spending a few hours on a job for each week—then they receive protection from the AWR.

Only contractors from umbrella companies, who are compliant with IR35, need to be concerned about AWR. AWR is applied the following.

An entity which provides agency workers to a separate entity or third party (also known as the hirer) for a short period of time is known as a temporary work agency. This type of worker must follow the command and supervision of the hirer, though their actual contract is only linked with the TWA. AWR marks any individual as TWA who provides temporary agency workers. Any agency or umbrella company may receive categorization as a TWA.

An agency worker is an individual who is originally contracted with a but is tasked to perform job duties under the administration of a hirer for a short period of time. The link between the TWA, the agency worker, and the hirer is an extremely important part of AWR, along with their eligibility.

The requirements of an agency worker are the following.

Any individual who is involved in economic activities and requests TWA for agency workers is referred to as the hirer. A hirer must supervise and control the agency workers during their assignment. A hirer can be a sole trader, company, public body, or a partnership.

Rights for the Agency Workers from Day 1

From the first day, agency workers must be granted access for site facilities (like childcare facilities, dining) and ability to check any information regarding job vacancies.

Rights When a Worker Completes 12 Weeks on the Same Job

When a worker completes 12-week qualifying period for the same hirer, then they are entitled to standard working conditions (like rest breaks, annual leaves) and income. Between assignments, any pregnant worker must be granted breaks to their ante-natal obligations. The 12-week qualifying period must begin from the 1st of October, 2011. So how does it affect all the stakeholders?

TWA is required to inquire details from the hirer about the working conditions and pay of their agency workers who are expected to work for more than 12 weeks. This is done to ensure that they receive the same benefits as those employees who are direct recruitments.

For a temporary agency worker, after the 1st of October, 2011, when they are involved in a job for 12 weeks, they are entitled to receive equal coverage in terms of standard working conditions and income. It does not matter if a worker only works for a few hours within a week.

If you are involved in hiring agency works from a TWA, then it ultimately your responsibility to provide clear and complete details on the working terms and conditions to the TWA. You have to ensure that agency workers are able to access any information regarding job vacancies and can access all of your facilities.

Exemptions are possible in two cases:

After the completion of a 12-week qualifying period, an agency worker must receive the same benefits as if they recruited directly by the hirer. These benefits include “pay”. Pay refers to the following.

However, it must be noted that the pay does not take in to account the following factors.

There are more exemptions related to pay for provisions of equal treatment if a TWA provides a permanent employment contract to an agency worker and provides compensation for the time-period between assignments (when they have no assignments). In such a scenario, an agency worker does not need to be treated as direct recruitment after the 12-week period.

However, the TWA has to provide such details to the agency so they can proceed accordingly like deciding if they plan to drop such entitlement and plan to engage in a permanent employment contract with an agency worker. The contract must explicitly mention that the agency worker is not entitled to AWR’s equal pay.

For the pay between assignments, it must be ensured that the rate is at a minimum of 50% of the standard assignment pay or at a bare minimum, follow the National Minimum Wage and processed from a reference time-period—the 12-week duration exactly before the pay period of assignments.

For qualification of such an exemption, it is mandatory for an agency worker to receive permanent employment contract from a TWA where they must provide their consent for all the conditions that are to apply on all assignment as well as their payment. An agency worker is not required to be paid before the beginning of the contract. These contracts must include these:

It must be recognized that the Regulation is concerned with only those contracts where there multiple hours (more than 1 hour) of work per week. Hence, zero-hours contracts do not fall into the AWR scope.

TWAs and hirer must not become involved in arrangements where the agency workers are exploited by eliminating their protection of payments between assignments. Doing this may land them into a legal mess.

In case, there is no permanent employment contract between the agency worker and the TWA that entails the derogation requirements, in such a scenario, a worker may be entitled the Regulations’ provisions of equal treatment; therefore if such a worker succeeds in their claim, then the TWA or even the hirer would be deemed guilty for violation of the Regulations and can receive penalties.

The Rate of Pay Between Assignments

Prior to the completion or termination of the contract, between assignments, the agency worker pay for a minimum of 4 weeks. It is necessary for the agency to take any “rational” measures to search for an appropriate assignment. Doing this would ensure that the agency worker has no ground to challenge the violation of the agreement or demand for equal treatment.

From the beginning, it is important that the agency worker and the TWA engage in conversation, confirm, and explicitly mention in a written contract about the acceptance of the worker for any specific type of assignment. In case, a worker rejects an appropriate assignment, then according to the contract, if the worker is unavailable for any work, then they may not receive any entitlement for payments between assignments.

Pay Preceding the Termination of Contract

Before the TWA terminates the contact, it is necessary to proceed with the 4-week pay for the agency worker.

AWR for the Umbrella Companies

Those contractors who perform work with the help of umbrella companies fall under AWR. However, if a contractor manages to clearly present that they are not working directly under the command and control of their hirer then it is possible that they are exempted from AWR.

How Are They Tackling It?

So far, umbrella companies have resolved to choose any of the following strategies, or even attempted to mix them, albeit with mixed results.

If the ‘Swedish Derogation’ model is used by an umbrella company, then they no longer have to be compliant for equal pay right.

Many umbrella companies have started to declare that they plan to use this model for their contractors and clients. Though, we believe that the model carries some disadvantages. For instance, arranging a 2-week pay for those contractors who are not currently under contract can be too costly for many umbrellas.

It remains to be seen who is going to arrange this payment among the agency, client, worker, and the umbrella company. Due to low margins of umbrella companies, it is difficult to expect them to arrange such payments. Similarly, both the agencies and end clients would not like such prospect due to budgetary reasons, especially considering the fact that it could be eliminated if the worker had their own limited company. Ultimately, the worker is left alone, and they would have to bear up the expenses.

As a result, the worker is at a disadvantage because of the ‘Swedish Derogation’ model because they are effectively getting lower pay.

Some umbrella companies have responded to this issue with their approach to consider each contractor similar to as how an insurance company would, and therefore they would determine the associated risks of the contractor’s change of contracts accordingly. However, even then, someone has to pay the insurance premium!

Matched Permanent Pay is already receiving uncertainty due to its exorbitant costs. It is expected that such a strategy would only be sufficed for those agency workers who are lowly-paid.